My daughter Sophie has just found an exactly 60 year old photograph of the late Count Eric Bonde who was a Kyrenia resident for very many years. The picture shows what he looked like without a shirt one day in January 1961 in Katanga, Congo, Africa, when he had been shot in a battle between rebels and a United Nations military unit and was  smoking a cigarette while holding a Swedish army submachine gun. 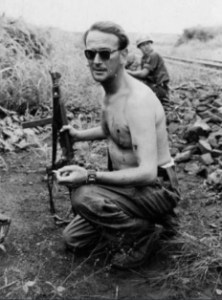 was still young and began studies in agriculture in Germany. He wanted to become a farmer. After graduation he settled in Kenya where he was employed as a farm manager and where he fell in love with a Danish air hostess who became Countess Bente Bonde.

At the outbreak of the “Congo crisis” in 1960, the Swedish General Carl von Horn was assigned by his friend, the then, UN Secretary General Dag Hammarskjold, to be the supreme commander of a multinational UN Force in the Congo

Eric Bonde, a friend of Von Horn’s, was chosen to join the Swedish UN Battalion in Katanga. During a train transport, Swedish troops, Major Bonde included, were attacked by rebels. The Swedish unit won the consequent battle, but not without losses. He was himself was hit by two bullets that penetrated his chest, but he survived. One of his soldiers yelled to him: “Sir, your shirt is red. You are bleeding. “ He replied: “Don’t be impertinent. My blood is blue.”

He took off his shirt, wiped off his red blood, sat down and lit a cigarette. Now this picture was taken. This was possibly to the day sixty years ago.

The Bondes and Carl von Horn later settled in Kyrenia on the northern coast of Cyprus where the Countess did voluntary work for the Red Cross.

Eric and Bente Bonde were well known in northern Cyprus, but they separated. The Countess died in her native Denmark and Major Count Eric Bonde ended his days in his Kingdom of Sweden.